A Jewdas Carol (The Haunting of George Osborne) 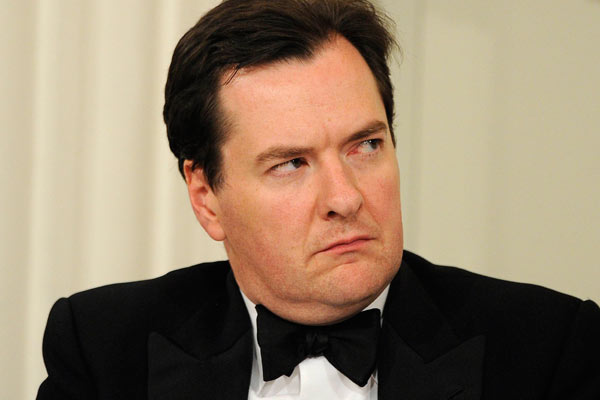 George was feeling joyful. He had spent another fun day at the office, dishing the dirt on former colleagues whilst warning of the imminent ‘red peril’ of a future Corbyn government. Truly, he was the voice of the sensible, silent majority, who want fiscal responsibility whilst only going fox hunting a couple of times a year. He deleted most of the begging emails he regularly received but decided to reply to one, from a homelessness charity. ‘Are there no prisons?’ he asked rhetorically. ‘Is there no social housing? Is there no jobseekers allowance? They cost enough – I should know, I tried my best to cut them back!’. Guffawing at his own quip George turned away from his desk. No do gooding pick-pockets would spoil his joy on this of all days.

He had, just that morning, received wonderful family news. His brother, having met a Jewish girl, wanted to get out of the arduous, and frankly painful, requirement to convert to Judaism. So he had done some research and found what he was looking for – the Osborne’s had a maternal Jewish grandmother! Making them Jewish! Never mind not knowing anything about Judaism or Jewish culture, this made George a 100% halachic, pukka, kosher yid.

George was delighted. No longer would left wingers be able to mock him by calling him by his middle name, Gideon. From now on, if they did so they would be antisemites mocking his Hebraic heritage. But moreover, being Jewish fitted perfectly his brand of neoliberal economics combined with social liberalism. Like the great Jonathan Sacks, being Jewish would allow him to put a compassionate face on his programme of destroying the welfare state. He smiled as he mused on the sermon he might give on being awarded the Genesis Prize, where he would talk of the ‘biblical injunction for the poor to look after themselves rather than being a drain on the community’. George looked forward to joining the social set of wealthy, opera going Jews who live in St Johns Wood, and being feted as a saviour of the community by donating a few thousand pounds to grateful Jewish orphans in Hampstead Garden Suburb.

George was naturally keen to celebrate his newfound status with fellow Jews. But, as yet, he didn’t know any. So he googled the date and was overjoyed to find that it was a friday, and that evening would be shabbat, or Shabbath as it was known in the Treasury. A night where, as George read on, Jews came together for prayer, food and celebration! George felt that any Jews gathering that night would welcome him with open arms, and probably make him the guest of honour. He polished off his editorial, calling for a new ‘centrist’ party to be led by himself and Jess Phillips, grabbed his coat and headed out. He didn’t have a kippah, but he picked up an Israeli flag that Mark Regev had gifted him – he was sure it would do just as well.

He arrived at the first synagogue he could find on the map, full of vigour. ‘Hello!’ said George. ‘Shabbath Shoalom!’ ‘You what?’ said the security guard. ‘Are you a member here?’ ‘No, but….I’m George Osborne! Former chancellor of the exchequer! And now I’m a Jew! ‘I’ve never heard of you’ said the guard. ‘Tell me the name of the Rabbi here.’

So George was not let in, as he had not reckoned with the zealousness of Jewish communal security. He moved on to another synagogue, but this one too had a security guard outside. ‘I’m afraid I don’t know anyone here’ confessed George ‘but I’m here for the weekly observance of the holy shabbath’. ‘Ok’ said the guard. ‘say something in Hebrew’. ‘errr….chutzpah’ said George ‘….shlep……netanyahu…Tevye……Hava…great time in Israel’.

So George, once again was turned away.  The same pattern was repeated at synagogues across London as George consistently failed to know any Jews or anything about Judaism, and nobody seemed impressed by who he was. He walked miles across London, and was about to give up, despondent, when he found himself outside a run down building in Whitechapel with a Magen David on the door. ‘Are you a Jew’ said the old man on the door. ‘Yes!’ said George, delighted. ‘That’s all I need to know’ said the man. Leave your verkahkte flag at the door’. George entered what must have been the most run down building George had been in since the lone day when he ventured into the rougher part of his old constituency to pose for a ‘tough on crime’ leaflet,

Inside the building were, quite literally, nine men and a dog. They were dishevelled but seemed content, sipping whisky and eating pickles. ‘Here we are chaps – I’ve found someone – God knows who he is but who cares, we have our tenth man!’ The men rose up and began to pray the evening service, but there was a strange feeling in the air, as if their prayers could not ascend to heaven, like there was a fault in the minyan. The men were chanting a range of words and gestures that George did not understand, so he leaned into his seat and closed his eyes. When he opened them, sometime later, the old synagogue was pitch black, and empty. George felt afraid. As he moved to leave, he heard a ghastly sound, emanating from the ark. Suddenly, with a mighty sound, the doors were flung open and a figure burst forth. It was the ghost of Keith Joseph. As he walked, he carried behind him a huge chain, made up of cash boxes, gold billions and coal. ‘ Sir Keith!’ cried George. ‘You have returned! You were the great inspiration for Margaret Thatcher’s political vision, and you have always been a great Conservative visionary in my eyes!’ ‘Shut up George’ said the spirit. ‘You see this chain behind me? This is the chain I forged in life! ‘I made it link by link, welfare cut by welfare cut, privatisation by privatisation’. I thought what I did was aligned with Judaism, and now I believe you think the same. Lies and narishkeit. Now I am forced to wander the earth, with all the other Tory spirits, paying my penance. But you George – you have yet a chance and hope of escaping my fate. Tonight you will be visited by three spirits… ‘I… I think I’ll just head home,’ said George. I have a lot of emails to…. ‘Three spirits!’ boomed Sir Keith. They will all be called Geoffrey. It is not entirely clear why. Heed the lesson they bring!’

At that, the spirit of Sir Keith headed back into the ark, dragging his huge chain behind him. At the end of it was a toy box, playing a ghostly version of ‘I’m in love with Margaret Thatcher’. As it disappeared, George breathed a sigh of relief. He nervously picked up his coat and headed for the door, wishing he’d never heard of this Judaism thing. He would just go home and return to normal, resuming his otherwise wonderful and glamorous life. But at that moment, all the doors of the synagogue suddenly bolted shut. And from the shadows emerged a mysterious figure, looking like it hadn’t washed for some years. The spirit was eating a beigel.