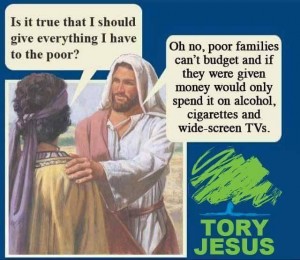 In a world exclusive, Jewdas has unearthed a new chapter of the New Testament, the book of George, in which Jesus abandons his previous obsession with feeding and healing people and becomes a compassionate Conservative.

The book will soon be published in full, in an exclusive publishing deal with the Daily Mail, but in the mean time you can read below our exclusive excerpts!

Tory Jesus on the ‘sick’…

“A woman who had been bleeding for twelve years came up behind Jesus and barely touched his clothes. She had said to herself, ‘If I can just touch his clothes, I will get well.’ Jesus turned. He saw the woman and said, ‘this country spends more on sick and disabled people that the OECD average. I want those who remained trapped on support move towards independence’ before kicking her in the shins.

Tory Jesus and the lepers who helped themselves!

“As he was going into a village, ten men with leprosy came toward him. They stood at a distance and shouted, ‘Jesus, Master, have pity on us!’ Jesus looked at them and said, ‘Go show yourselves to the Work Capability Assessment Centre’. On their way, their benefits were sanctioned. When one of them discovered he was sanctioned, he came back, shouting ‘I always hated you Jesus!’

He yelled mightily at Jesus, who sped away in a ministerial car”.

Tory Jesus and the road to a stronger economy

“Jesus went up on the mountain, and there he sat down with his disciples.  Lifting up his eyes, then, and seeing that a large crowd was coming toward him, Jesus said to George, “Where are we to find food, without breeching our commitment to controlled borrowing?”

George answered him, “It would take more than a tripling of our 2016 welfare provision to buy enough bread for each one to have a bite!”

Another in the crowd, Jeremy, spoke up, “We could always increase corporation tax? Some of these companies have got loads of money.”

Jesus said, “Have the people sit down.” There was plenty of grass in that place, and they sat down (about five thousand people were there). Jesus then explained that he could not feed these people, as it would destroy their incentive to better themselves.

They were then all kettled by the police.