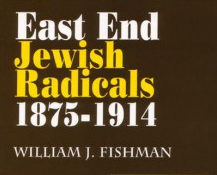 We meet once a month after shabbat to read radical / Jewish / Queer / Feminist texts.

AK Press: “Professor William Fishman, son of an immigrant tailor, describes London’s East End at a time of mass immigration from Eastern Europe to the shabby tenements of Stepney and Whitechapel. He describes the spread of libertarian and socialist ideals among the Jewish community culminating in the great strikes of 1889 and 1912. It was in London’s East End that Rudolf Rocker taught himself Yiddish and helped politicize a generation. An extraordinary period of Jewish, immigrant, and radical history, described by an inspired storyteller.”