In a story that has rocked north London, Jewish Chronicle editor Stephen Pollard is rumoured to have an uncircumcised penis.

Suspicions we raised after a series of articles posing as ‘investigative journalism’ discussed a shocking case of a person under 35 being discovered at the Board of Deputies. In a further shock, the individual turned out to be a critic of circumcision, or an ‘anti-shmekalist’ in the words of  ‘journalist’ Simon Round. The scandal provoked a firestorm of activity at the Chronicle, at the peak of which Jessica Elgot created an article from the first page of a google search. Not to be outdone Geoffrey Alterkaker ditched his planned article on the pleasure he gets when activists are murdered in order to pen a column entitled ‘If you don’t cut your shlong you’re an jew-hater’. Justifying its vitriol, a JC spokesman referred to the newspaper’s style guide, which makes clear that there are in fact only seven ways of being Jewish, though he added that three of those were ‘ a bit dodgy’.

The coverage, however, proved to reveal more about the JC’s editor than about the activist in question. In an emergency meeting of the Hampstead Freud society, Jewish psychoanalysts pronounced the JC’s coverage a clear example of transference and circumcised penis envy in which Pollard’s obsessive coverage of the issue was in fact a reflection of his own embarrassingly complete member. In a email, academic Daniel Boyarin suggested that Pollard’s compulsive hatred of Palestinians was in fact a desire for ‘phallustine’. A further insight into Pollard’s unstable mental condition was by revealed by Stamford Hill talmudists, who, on analysing his editorial, discovered that the first letter of each line spelled out ‘Sorry Desmond – Will you have me back?’ 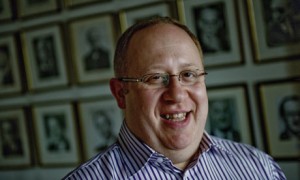 Pollard, reminiscing over the bombing of Gaza

Rumours spread like wildfire at the following Board of Deputies Plenary Meeting, which organisers described as ‘democratic’. Amongst break out sessions including ‘Young People – More Trouble Than They’re Worth?’ and ‘If We Give Women A Few More Rights, Will They Shut up?’, deputies held feverish whispered discussions, with each making excuses to visit the toilet as often as possible, in the hope of catching Pollard in the neighbouring urinal. To recall such a scandal, seasoned deputies had to go back to 1974 when Chief Rabbi Jakobovits was rumoured to be hermaphrodite.

Head of the JC Board Anthony ‘everyone’s a Judeophobe’ Julius dismissed suggestions that all of Stephen Pollard’s disastrous editorship was penis related, pointing out that ‘he’s simply an terrible journalist’. Others saw an opportunity for the Jewish News to conquer the Mosaic market, but they are currently preoccupied with a redesign, in preparation for their relaunch as ‘Sheitel Sluts’ , cointaining a free glossy magazine: JILF.

The matter remains unresolved, not least because Pollard himself has been unable to see beneath his waist since 1989.