When Freedom of Speech is Under Attack, What do we do? Sit down, write a blog post 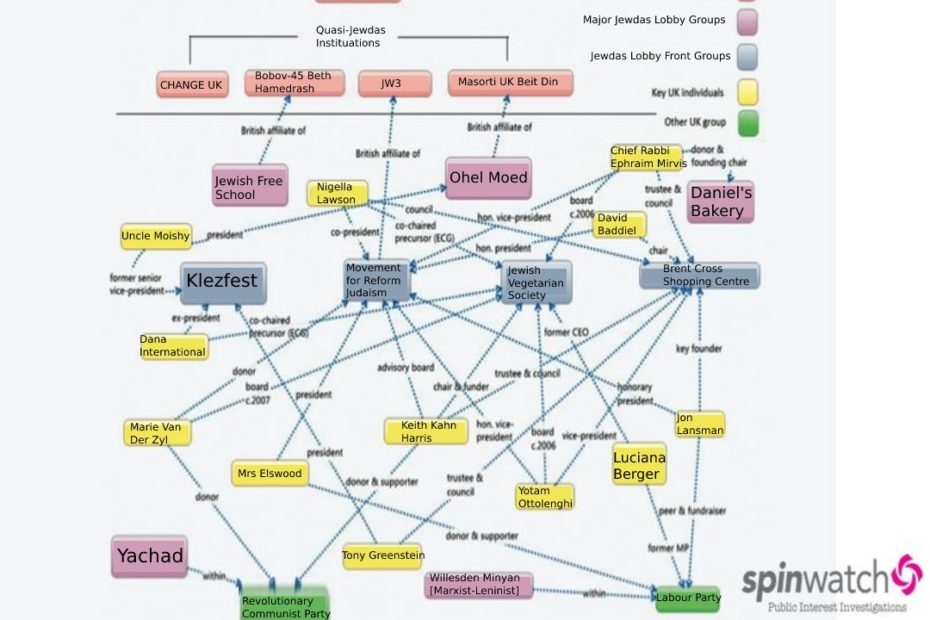 Recently, after years of extensive undercover research, Jewdas leaked a shocking expose to our social media of the shady network of organisations and individuals proposing up Jewdas in Britain.

Good reporting can sadly come with unintended consequences. As a result of tweeting this, we quickly realised we’d unwittingly created a monster we never set out to create: Twitter discourse. In particular, a war of words was sparked by some of the left wondering if maybe we weren’t quite as good Jews as they wanted us to be.

For those out of the loop, the graphic we posted took some inspiration from one created by spinwatch, a project of university lecturer David Miller.

David Miller has been facing accusations of antisemitism for a couple of years now from Jewish students at Bristol University. These have accelerated over the past couple of weeks, with the Bored of Deputies stepping in to request the university fires Miller. Several people saw our post as an endorsement of these attacks.

In response to this situation, we’ve put together an overly long, nuanced post without any concrete suggestions to improve the situation. We hope Yachad will forgive us for culturally appropriating them just this once.

The first thing to note is that David Miller is, to use the academic term, bad vibes. He is Director of the Organisation for Propaganda Studies, which has been accused of spreading conspiracy theories about the white helmets. His website Neocon Europe uncritically published the writings of a neo-Nazi. Miller’s writings on Jewish institutions contain few outright falsehoods, but they are embarrassingly conspiratorial, significantly overstating the influence and aims of various organisations.

Let’s take the above graph for example. For starters, the lack of arrows connecting the key players is poor effort; we could add in at least an extra five off the top of our head. There’s at least a 75% chance these people are all second cousins to each other. Describing the JLC as a ‘key’ Israel lobbying group, more so than the Zionist Federation, is unfairly flattering to them. All this exposition by Miller’s organisation shows is that Zionist Jews with too much time on their hands get involved in several Zionist Jewish causes. It’s tempting to blame the ills of the British government on a small, powerful group of people manipulating our politicians. But the left needs to remember that the UK isn’t pro-Israel and anti-Muslim because of a well organised Jewish lobby. The UK is pro-Israel and anti-Muslim because it’s an imperialist, racist shitstain of a country.

Yet, having said all this, it’s important to remember this is all happening in the wake of some pretty terrifying suppression of pro-Palestine and more broadly left-wing organising at UK universities. The government is threatening to cut off funding to universities which refuse to adopt the IHRA definition of antisemitism, and looking into plans to fine universities which don’t promote free speech in a way the government agrees with (the irony seems totally lost on them). Many opponents of Miller don’t want him fired because his lectureship is dodgy, they want him fired because he said Zionism is a racist, violent, imperialist ideology.

It is therefore incumbent on us to loudly say that Zionism is racist, violent and imperialist, and that nobody should lose their job solely for holding this belief. Some Jewish students may feel deeply uncomfortable that an ideology dear to them is being attacked, but this does not make criticising Zionism antisemitic. Now is a crucial time to defend pro-Palestinian organising on campus and to push back against the interference of a right-wing government in universities.

Whether David Miller’s writings about Jews and Zionism cross a line into outright antisemitism, whether he is an irredeemable antisemite or someone who could benefit from conversations with left-wing Jews, whether someone with his beliefs should be fired from being a university lecturer, are all questions we don’t wish to answer. We don’t all agree on what transformative justice looks like in cases of antisemitism, and we don’t know enough about this particular case.

What we do feel confident saying is that avoiding conspiracy theories is hard for the left, because a lot of them turn out to be at least partially true. Police really did go undercover to spy on vegans, America did hire Nazis to defeat communism, pharmaceutical companies did knowingly spread AIDs in Asia and Latin America, Israel did steal Mizrachi children and give them to Ashkenazi families. We’re pretty sure, but not certain, that Avril Lavigne is dead and Justin Trudeu is Fidel Castro’s son.

How then do we proceed with critically examining the information we get from state institutions and billionaire-backed media, without falling into conspiratorial fantasies? How do we protect our communities from spreading dangerous misinformation, whilst protecting freedom of speech? How can we encourage people to think critically about the role of Zionism in the Jewish community, whilst also being proportional and sensitive to the genuine fears of a people who have experienced genocide in living memory? There aren’t easy answers, but we would suggest a good start is to engage in these issues with a great deal of humility, curiosity, and empathy.

It’s hard work being on the left, and being committed to building a better world out of this horrendous, imperialism-scarred, capitalist nightmare of a planet. Paranoia, anger and tribalism are perhaps inevitable in these building conditions, but too much of them paralyses us. The good news is when we take a break from Twitter arguments and internet rabbitholes, and speak openly and compassionately with our comrades across differences, solidarity can emerge which actually sustains what we do. It’s hard work building this new world, but it’s holy work too.

5 thoughts on “When Freedom of Speech is Under Attack, What do we do? Sit down, write a blog post”