Netanyahu is antisemitic, according to IHRA definitions 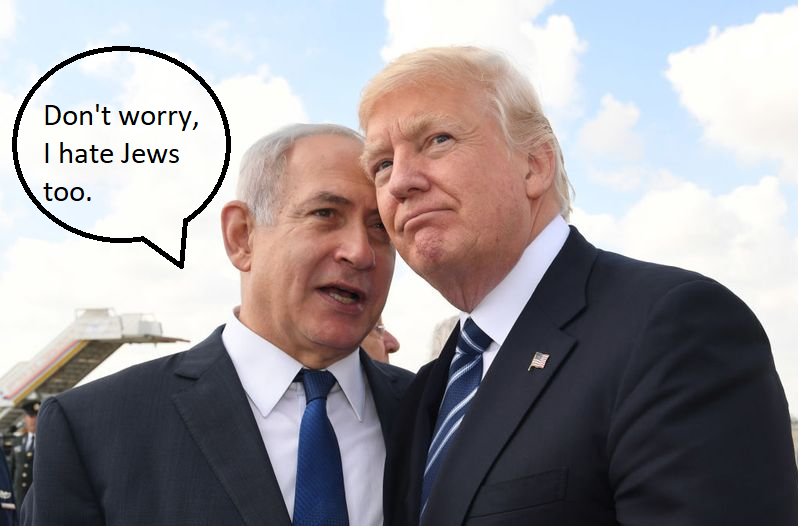 World leaders have been criticised for sharing a platform with known antisemite, Benjamin Netanyahu.

Donald Trump, Angela Merkel and Theresa May have all come under fire for meeting the notorious Jew-hater and prime minister of Israel.

In her most scathing teshuva yet, Rabbi Geoffrey Cohen denounced Netanyahu as a racist. “Several times in the last year, Bibi has egregiously flouted the IHRA examples of antisemitism. Any world leader who meets with this man is guilty of racism by association.”

Among the definitions given by International Holocaust Remembrance Alliance is “denying the facts of the genocide of the Jewish people at the hands of Nazi Germany and its supporters.” In 2015, Netanyahu famously claimed that Hitler didn’t really want to murder the Jews, but only did it because the Palestinian Grand Mufti of Jerusalem told him to, contradicting the facts of the Shoah and minimising the Nazis’ guilt.

Only last month, the Yad VaShem condemned Netanyahu after he absolved Poland of any guilt as part of a trade and recognition deal. In a statement, Netanyahu gave support to Poland with their law that made it illegal to talk about Polish concentration camps or Polish complicity in the Holocaust, punishable by three years in jail. He denied Polish complicity and even minimised their pogroms, in a statement so egregiously untrue that even Naftali Bennett condemned it.

Because of Netanyahu’s record for Holocaust denial, every world leader who has met with him has been deemed to share his unconscionable views. “When will Theresa May resign?” asked Rabbi Geoffrey, in a statement backed by religious leaders from Slough, Milton Keynes and Inverness.

Another of the IHRA definitions that Netanyahu has serially flouted has been “accusing Jewish citizens of being more loyal to Israel than to their own nations.” Indeed, Netanyahu has repeatedly insisted that Jews have no place in Europe. After the Charlie Hebdo attacks in 2015, Bibi told French Jews to “come to their real home” in Israel. In the same year, after a sickening attack on a synagogue in Denmark, Netanyahu repeated his claim that Jews really belonged in Israel.

At the time, religious leaders on the continent criticised Netanyahu for playing games in the build-up to an election. Rabbi Geoffrey was among them, having said “it is now asur for anyone to look Netanyahu in the eye without spitting on him.” Since then, Donald Trump, Emmanuel Macron and Theresa May have all met with Bibi and none of them spat on his face. This has prompted serious questions in the community about whether these premiers really hate Jews.

Netanyahu has hit back at these accusations. “OK I may have broken a couple of the IHRA examples, but they’re only guidelines and I didn’t break all of them. For example, I never called for the killing of Jews in the name of an extremist view of religion,” Netanyahu said at an IDF recruitment drive in the south Hebron hills.

“Also, I never suggested that Israel was a racist endeavour. I wouldn’t say that we would maintain a Jewish majority even if it meant abusing human rights. That wasn’t me. That was my justice minister, Ayelet Shaked. So there.” 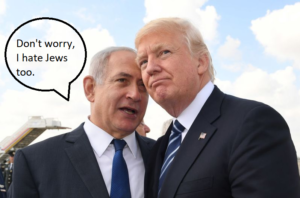 4 thoughts on “Netanyahu is antisemitic, according to IHRA definitions”