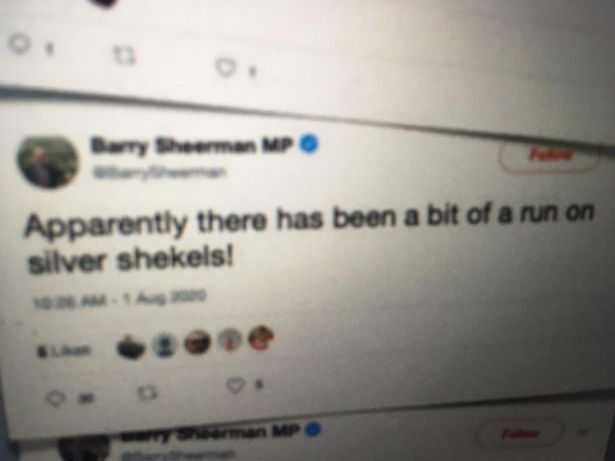 This letter was sent to Keir Starmer MP, Leader of Her Majesty’s Loyal Opposition on Tuesday the 3rd of November. We have had no reply so we are publishing it here, in full.

We are Jewish members and supporters of the Labour party and are writing to you about the antisemitism that is endemic in the party and the decisive actions that are required to tackle it.

The EHRC report into Labour antisemitism found the party to be in breach of the law. We welcome your commitment to swift action and a zero-tolerance approach to antisemitism. We also welcome the principle that claiming an accusation of antisemitism has been “dramatically overstated for political reasons” is a form of antisemitic harassment that is incompatible with Labour Party membership.

While we agree with those who claim that antisemitism is an institutional issue, we are sure you agree that, unfortunately, there are also high-profile public figures and elected representatives in the party who hold views not in line with your commitment to eradicating antisemitism. We would like to see the full weight of your commitment applied consistently across the party.

We have all experienced antisemitism within the party and, in light of this new zero-tolerance approach, feel compelled to alert you to these individuals (including several MPs and a Lord) who should be urgently suspended from the Labour Party until such time as they can be permanently expelled:

Luke Pollard MP successfully initiated a campaign to erect a statue to a self-professed antisemite, namely Nancy Astor, for her contributions to women’s rights. Mr Pollard then refused to apologise when confronted with Astor’s record of hideous antisemitism. Given your principled actions thus far, we trust you will agree that Astor’s support for the Nazi Party and her description of Jews as a “world problem” make Mr Pollard’s statue campaign entirely unacceptable for a Labour MP.

Rachel Reeves MP tweeted public praise for Nancy Astor with regards to the planned statue. Ms Reeves refused to retract her tweets or apologise when confronted with Astor’s antisemitism, in particular her claim that Hitler would have to do more than “give a rough time…to the killers of Christ” before Britain should risk war.

Barry Sheerman MP tweeted, “Apparently there has been a bit of a run on silver shekels!” This was in relation to two Jewish businessmen left off the Lords list of that year.

Iain McNichol purposefully mishandled, or allowed to be mishandled, claims of antisemitism while Chief Executive of the Labour Party. This led to antisemites being allowed to stay in the party and directly threatening the safety of Jewish members. We trust that you understand that such minimisation of the problem of antisemitism in the party is abhorrent and that Mr McNichol’s culpability for the Labour Party’s unlawful conduct while in the position of Chief Executive – as outlined in the EHRC report – render him unfit to be a Labour parliamentarian.

Steve Reed MP described a Jewish businessman as “the puppet master to the entire Conservative cabinet.” This is a long-standing antisemitic trope employed by Nazis and other antisemites and its prevalence in the Labour Party is a direct threat to safety of Jewish members.

Lisa Nandy MP described antisemitism as, “a racism that punches up”. The implication being that Jews are an elite group with disproportionate power in society. This is an incredibly dangerous antisemitic notion and has no place in the Labour Party.

We note that some of these individuals may have apologised. We do not accept their apology any more than we accepted the previous leader’s oft-repeated apologies. As they say in Israel, “apologies cost nothing”. Due to the seriousness of these instances of racism, we demand the immediate suspension from the Labour Party of these 5 MPs and 1 Lord while you arrange their permanent expulsion. We would consider such decisive action as a demonstration of your commitment to eradicating the scourge of antisemitism from the Labour Party. Anything less will be understood as an attempt to minimise the extent of the problem and an insult to the Jewish people.

We would appreciate confirmation of the actions you are intending to take on these cases before sunset on Friday 6th November 2020.