Veganism Without the Big V

Despite being a vegan – almost all of the time – I think Rone Nachman does make a valuable point in this talk when he says “don’t tell me [veganism] is a holy endeavor that G-d himself is proud of”. It’s all too common for vegans to be self-righteous about their higher ethical code than non-vegans. Though veganism does provide an important framework for minimising ones cruelty to animals and damage to the environment, it should never in itself be viewed as a universal ethical code, a ‘holy endeavor.’ Rather, it tends to derive from something which is such an endeavor – a care for animals and the health of the planet.

I feel like I’ve come across numerous situations where it just feels contradictory to maintain the reasons I adopted a vegan diet whilst eating vegan food. Times like when I had access to eggs from my garden chickens but decided to forsake these for supermarket tofu, when I lived in an area where the natural fats came from animals rather than rape seed monocultures or imported oils, etc. Then there have been times like when I’ve been cooked for by someone (usually an old someone) who would  simply get painfully flustered were I to turn away their shmaltsy offerings. Sometimes it just does not feel like being a vegan helps animals in any way.

Taking veganism, or eco-kosherism, seriously does not mean you should apply something like veganism dogmatically, in fact quite the opposite, it demands pragmatism. Unlike mainstream Kosherism ideas like eco-kosherism offer no easy solutions and no deferred responsibility. It demands thought, research and care. It demands that sometimes you might have to not be vegan in order to be a vegan. Veganism with a big V is a cop out just as much as Kosherism with a big K. 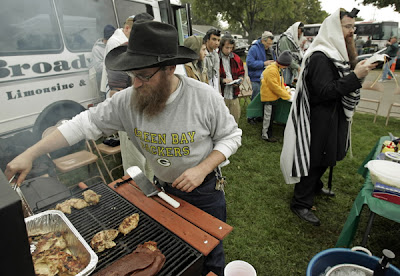 In this Youtube lecture, Nachman should have critiqued non-vegans more. He rejects the idea that not eating meat might be a religious endeavor yet he subscribes to the idea that eating meat is one. Nonsense. Though he pays lip to vegans, he stacks the weights against them. Lets face facts: the industrial farming of animals, which is the main source of animal products in Western countries, is one of the major contributors to global warming and is so disgustingly cruel that the Yiddish Nobel Laureate I. B. Singer described it as an “eternal Treblinka.” Yes, this also applies animals reared in the Kosher animal industry. There can be no mitzvah deriving from eating farmed smoked salmon on cream cheese made with the supervision of a rabbi. Especially on Shabbes! How strange the idea that god would want us to compromise our ethics on the holiest day of the year.

Despite saying this, a situation might arise where it would make more sense to eat something from such a ghoulish farm, as I mentioned before. So if there is any mitzvah to be had from ones diet then surely it would not come from the strict adherence to being an absolute vegan: it would come from thinking about what you put in your mouth. From taking responsibility for your own actions and not leaving it to a yeshiva boykher passing time as a shochet. Thus, if you live in somewhere like London and care about the values of kosherism then I’d imagine most, if not all, of the time you’ll be eating ‘vegan’ food.

on a separate note:

Nachman is completely wrong in claiming that it is so hard to be a well balanced and healthy vegan! A mix of dark green vegetables (kale, broccoli, spinach), pulses and beans, whole grains, fresh fruit and veg, seeds and of course Marmite (vitamin B12!) gives you pretty much everything you need in a much more healthy and digestible form than meats, milk and all that. You just need to know how to cook! (ahem, Nachman?)